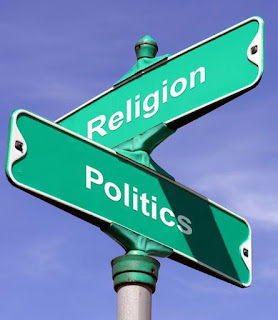 "You can’t talk about Religion or Politics in Rotary"

I’ve heard that comment bandied about the place, and it’s had me scratching my head. Just to set the record book straight, there is no such rule. We do have rules about adopting political positions, with good reason. Our ability to be first responders with international aid such as Shelterbox depends on us remaining a non-political and secular organisation. But some members have a knack of conflating the two issues of “taking a political position” and “discussing politics”.


Politics
RI and its member clubs refrain from issuing partisan political statements. Rotarians are prohibited from adopting statements with a view to exerting any pressure on governments or political authorities. However, it is the duty of Rotarians
1) In their clubs, to keep under review political developments in their own communities and throughout the world insofar as they affect service to their vocations and communities as well as the pursuit of the Rotary objective of world understanding and peace. They are expected to seek reliable information through balanced programs and discussions so that members can reach their own conclusions after a fair, collective examination of the issues.
2) Outside their clubs, to be active as individuals in as many legally constituted groups and organizations as possible to promote, not only in words but through exemplary dedication, awareness of the dignity of all people and the respect of the consequent human rights of the individual. (89-134, RCP2.100.)
That’s right, far from prohibiting discussion, our Manual of Procedure asks us to discuss these topics!

So, where did we ever get this idea that discussions on politics and religion were taboo in Rotary? This is a societal convention, not a Rotary convention. Obviously these are hot button topics where people hold deeply seated views and open discussion can cause conflict. So it’s easier to stifle debate. But aren't we above that in Rotary? If one’s beliefs cannot withstand the scrutiny of others, are they really worth holding?

The secret of course, is respect. Surely intelligent community citizens can hold conflicting views and still respect each other. Diversity has always been a cornerstone of Rotary membership. There’s a reason a club’s membership base cannot be all butchers. We need the bakers and the candle stick makers as well. We depend on cultural diversity, as we depend on diversity in age and gender amongst our ranks. We cannot demand diversity in our membership and expect conformity amongst our views.

If Rotary is to grow its capacity as an agent for effective change, peace and conflict resolution and the lifting of the standard of life for the world’s disadvantaged, it surely relies on a membership base that is prepared to discuss the tough issues.

The next generation of Rotarians are more likely to wear their political views on their sleeves, and if we are to engage them in our membership, we had better be prepared to include these “taboo” topics in our conversation. We can’t use catchphrases like “Join the Conversation” with our fingers crossed behind our backs hoping that the conversation is not awkward.

Sadly, it is also becoming increasingly difficult to have mature conversations about religion, but it needn't be. Respect is again the key. I was recently at a Rotary Christmas dinner where a totally appropriate and respectful Christian Christmas message was delivered. But the speaker herself (a Salvation Army envoy) indicated that she was wary of raising religion in Rotary. I didn't have a problem with it, and I'm an atheist, so I would hope no-one else would be uncomfortable.

It’s time to embrace our differences, stop worrying about stepping on egg shells and get on with the job of making the world a better place. There will always be differences of opinion in Rotary – in fact there must be. Last year my own club lost a Rotary legend, Keith Walter, a member of 45+ years. He was someone who I had an enormous level of respect for, but he was often outspoken at meetings if he felt we weren't doing the right thing. Over the years, we had a number of disagreements, particularly with regard to change in the organisation. But I can distinctly remember after every meeting where differing views were expressed, Keith would come up to me (or the member in question), shake me by the hand and say, “Well done, that was a good conversation.” And we would continue on our way as good friends. Respectful dialogue - now that’s what Rotary is all about!