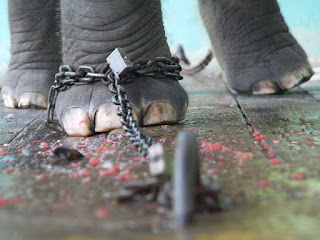 I am at times in Rotary reminded of the practice of training captive elephants in circuses or as working farm animals. The keeper starts with a baby elephant and chains one of its legs to a long stake which is driven into the ground so it cannot escape. A baby elephant will try for a while to pull that stake out of the ground, but soon realises it is not strong enough, and just gives up. This same practice is followed all the way through to adult life. An adult elephant could easily pull that stake from the ground, but they have been conditioned to believe that they cannot wander beyond the length of the chain, so they don’t even try.

You've probably realised this blog is not about elephants. The baby elephant principle is also used to describe human behaviour. It implies that we humans often fail to reach our true potential because we limit our risk taking and only live our lives within those barriers we've been conditioned to apply to ourselves. Most of us only play within the length of our chain. We fail to be bold.

Today marks the second anniversary of the chartering of my Rotary club; the Rotary Club of Seaford. Since chartering our club has experienced considerable growth; not just in membership, but in capacity, exposure and most importantly; impact. We conducted a "Yass Plan" inspired recruitment campaign over the last few months which culminated in an information night on November 8. Close to 50 turned up that night, and it appears we will have at least 8 new members to induct in coming weeks, which will take our membership to the mid 30s.


One of our hardest working members is Ian Renshaw, an experienced marketing specialist. Ian personally put in an amazing effort to get bums on seats for our information night, and following the success of the night made a comment which hit the nail on the head. "It's all about the product. We have a great product to sell". The list of projects and events our club has undertaken over the last two years is nothing short of extraordinary. We're very, very busy. I constantly get feedback from outside the club that many Rotarians cannot fathom how we fit so much in. Well, there are a number of reasons.

Our average age is much lower than that of most clubs, so we do generally have a higher capacity for hands-on work. The proportion of active members is fairly high. I would imagine this is usually the case when clubs are new. Because we're only meeting twice a month, members have that extra energy and enthusiasm to give. They're not having their valuable time wasted in unproductive meetings. But I've come to realise that there is one underlying advantage we have that is more powerful than any of these reasons, and I will share it with you shortly.

In a speech at the International Assembly in January (above), CEO John Hewko challenged districts and clubs to be bold. He also promoted an initiative of "The Rotarian" magazine whereby each month it would feature a club which was a great example of innovation. It was an enormous thrill to see the Rotary Club of Seaford featured in the January issue, which was displayed during his presentation.

I have spent a lot of time over the last few years speaking at membership conferences and seminars across Australia and New Zealand, and I normally dedicate part of my presentation time at these events to outlining the Seaford operating system, and my thoughts on why the club has thus far been so successful. It's my hope that this inspires delegates to also be bold; to try a few new things in their own clubs.

I remember speaking at a few Presidents Elect Training Seminars (PETS) last year, and after outlining the Seaford story getting a lot of similar feedback from soon-to-be presidents at both events in separate cities. They loved what we were doing, but lamented "that stuff would never work in my club". I can't give a lot of guarantees when it comes to club innovation, but one guarantee I can give is that if you're not prepared to try something, it won't work. You miss 100% of shots you don't take. 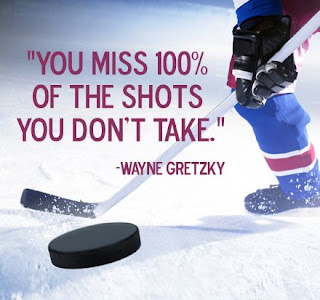 So, what was that incredible advantage I hinted at before? What is the secret to our boldness? Quite simply, we have no baggage to contend with. You cannot imagine the freedom and power you have to drive a club forward when there’s no baggage to hold you back. I can’t even begin to put a value on it. We have never been even remotely constrained by doubters. There were certainly a few people outside of the club that had their doubts that the club would ever get off the ground, and I suppose that’s understandable given our district had lost 10 clubs in the preceding 10 years. We did have challenges getting those initial 20 charter members required to start the club, but I always thought once we were chartered, we would encounter sustained growth. And that we have.

We have a strong "let's give it a go" mentality. I see a lot of Rotary clubs that could probably achieve a lot more if they only got a bit inventive and tried doing things differently; if they were bolder. But their members have been restrained by conditioning to only do things the way they have traditionally been done.

Starting a new club from scratch however meant that chain was never shackled to the baby elephant’s leg. The elephant grew up unconditioned; allowed to roam free all of its life. Uninhibited thinking leads to greater innovation and more risk taking, and clubs can reach their true potential in every facet, including the way meetings are scheduled and run, the types of projects and fundraisers taken on, the way the club promotes itself, the partnerships built with other NGOs, schools, businesses, and of course, the diversity of our members. 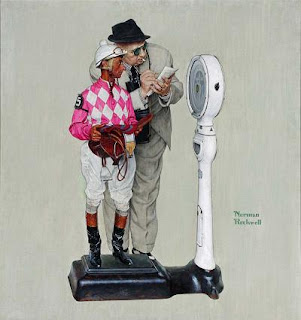 I have written extensively over many years about our resistance to change, and I have often (perhaps unfairly) levelled the blame at those more conservative Rotarians amongst us that like things to be done the way they have always been done. I still don't doubt that the guardians of the status quo are at times holding us back, but I do wonder if there's also an element of the baby elephant principle at play here. Is it possible that it's not solely our senior, tradition loving members holding us back, but also that fear of wandering beyond the length of the chain? If humans fall into this trap, I would theorise that Rotary clubs are also limited by the way their members have been restricted by their conditioning.

I've been very lucky to be a leader in a club that is not restrained by decades of habitual Rotarian behaviour. Imagine being the jockey on the best horse in the Melbourne cup and having your handicap removed. You'd probably win by the length of the straight. It's time to lose the weight from our Rotary saddle bags and pull the stake out of the ground. Unencumbered Rotarians can achieve anything they set their minds to. Let's be bold.
Posted by Creatures of Habit at 22:58